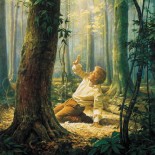 Back in the saddle

Here’s the lowdown: I was raised Mormon on a small farm in central Utah and served a mission in Paraguay.  A year or two later, I walked away from the church because I am gay.  Cue lots of sex, lots of drugs, a few college degrees, 12-step recovery, and a healthy dose of Buddhist meditation.

Ten years after leaving, I feel moved to return to the church.  This scares me.  I really don’t know what it’s about or whether it will last.  I’m dipping my toe in for now.

I attended my local singles ward last Sunday and have contacted active gay Mormons in the area.  I have even started a fake-it-til-you-make-it “act like a Mormon” experiment, which involves abstaining from coffee, black tea, alcohol, sex, and certain other salacious activities.  So far so good!